This is one of a series of six posts covering my lip injury and surgery. Here’s Part I.

Before I get into my long–term recovery, I thought I’d include a few more details on what it’s like living with a bunch of fresh stitches in your top lip, which is part of the mouth, which is a part of the human body that moves a lot. A lot. My surgeon, Dr. McGrail, hadn’t put any restrictions on eating or talking for me, but nevertheless a couple of things became clear very quickly. First of all, it’s pretty hard to do either of these things the first day after lip surgery, and you’ve got to eat much more slowly and carefully than usual because you can’t open your mouth very wide. During dinner the night of the surgery I was very careful at first, but eventually got a little carried away in conversation and forgot about eating slowly and carefully. One of the stitches started to bleed a little bit (all over my fish and chips!) and while it was no big deal in the long run, it was a little scary and a little gross. Talking and eating got significantly easier just in the first 2-3 days, though. Smiling was quite painful at first, and it really seemed to put stress on the sutures. I smile a lot, and avoiding it was a big adjustment. I found that while I could keep in under control most of the time, it was almost impossible to keep the smile under wraps if I witnessed something funny. To that end, I began trying to avoid humor entirely for the first week or so. It sounds silly, but learned pretty quickly not to visit The Onion, check out comedians on YouTube, or even watch movies. By the way, it turns out that the a surefire way to prevent laughter or smiling of any sort is to watch Reba, a handy tip I discovered the first night while I was getting ready for bed and Sarah was watching TV. Back in Albuquerque after the surgery, I more or less resumed living my normal life while the lip began the process of long–term healing. I hadn’t been playing the trumpet very seriously anyway in the weeks between the injury and the surgery, and fortunately my four part time music education jobs were paying the bills. Having multiple income streams is one of the keys to being a successful freelance musician, and in this case, it saved me a lot of additional stress. The incision above my upper lip healed gradually (check the previous post for gnarly post–surgery pics), and the Tylenol 3 (with codeine) took care of the lingering pain. By the third day after the surgery, I noticed that the incision was starting to look a little better (and I no longer needed the Tylenol 3). I noticed almost daily improvement from that point on: [caption id=“attachment_180” align=“aligncenter” width=“384”] 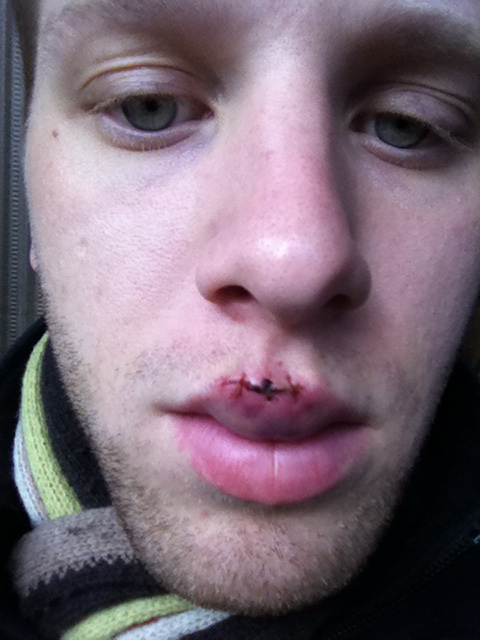 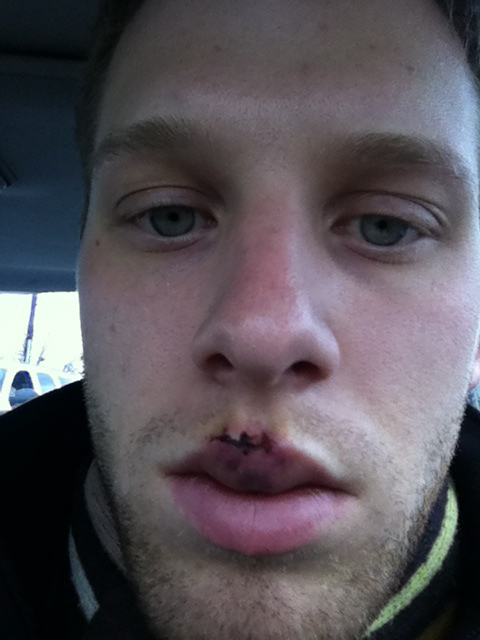 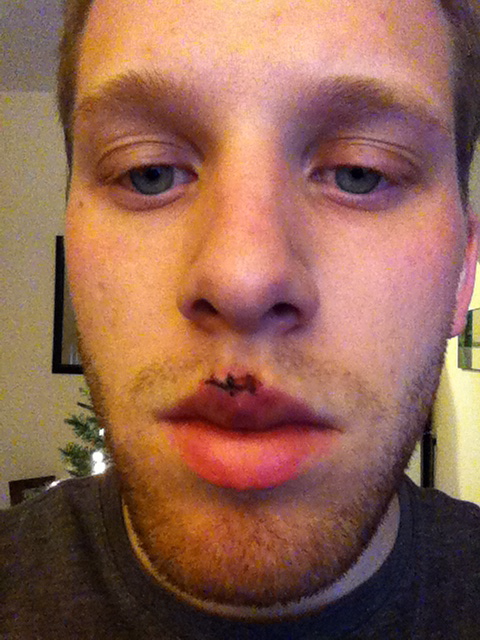 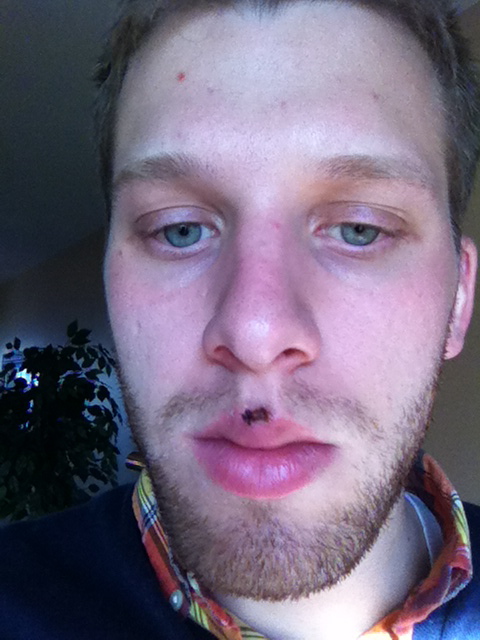 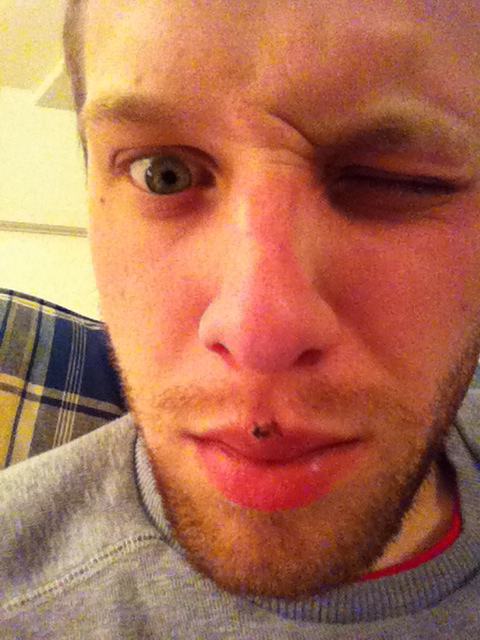 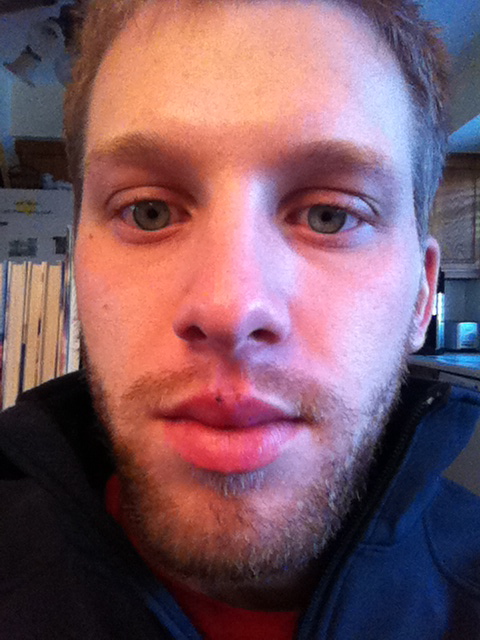 Two weeks after the surgery.[/caption] The sutures Dr. McGrail used were absorbable, meaning they would gradually dissolve inside my lip (weird!) and any outer stitches would fall out. They eventually did, and by the two–week mark only one of the stitches remained. I called Dr. McGrail a few weeks after the surgery as he’d instructed me to, and after asking me a few questions, he cleared me to begin physical therapy using exercises he’d designed. Like all physical therapy, it was pretty hard at first. The muscle was weak, thin, and not feeling much better than it did before the surgery. Nevertheless, I did the exercises faithfully and noticed the the muscle felt a little stronger. After a few weeks of this, I spoke with Dr. McGrail on the phone again and was cleared for lip buzzing and eventually, mouthpiece buzzing. If my lip felt terrible, I sounded even worse. I was able to start playing the trumpet about 3 months after the surgery, and it was immediately clear that the operation didn’t magically return my lip to normal (as I’d kinda hoped it would, though I knew better). The lip felt a lot like it did before the surgery, actually, except now there was a sizable hunk of inflexible scar tissue right where I needed to place the trumpet mouthpiece. I made some progress in my first few weeks back on the trumpet, but, like many injured musicians, I was disorganized and overeager. Instead of taking care of my still–delicate lip by carefully planning out my practice time and keeping good track of my daily playing, I tended to just pick up the horn, play a simple exercise until I felt tired, then rest for, you know, however long I felt like it. Not a recipe for success. One day as I was playing, I felt a familiar sharp pain in my lip. I was immediately convinced I’d torn the muscle again, and utterly dejected, I didn’t know what to do. I ended up putting the horn away for a long time. Sarah and I had been discussing leaving Albuquerque and moving back to Missouri, our home state, and about six months after my surgery, we did just that. She applied for and landed a great job teaching high school English in her hometown, and to my great surprise, I got a great job too, as an academic advisor at our alma mater. With a change of scenery and a new career to focus on, I turned my attention away from the trumpet for the first time in ten years. And, to be honest, it felt good. Part six is here!