This is one of a series of six posts covering my lip injury and surgery. Here’s Part I. Okay, this is a long one. Grab a cup of coffee and hunker down! With my lip surgery scheduled for December 17th, 2011, I had a couple of months to kill before the big day. My surgeon, Dr. McGrail, had cleared me to continue playing and gigging if I wanted - the muscle was already torn, and in such a way that it wasn’t going to get any more torn if I kept playing. As you might imagine, though, I didn’t much feel like playing trumpet. I took a couple of easy gigs but mostly left the horn in its case. Needing a vessel for my musical energy, I threw myself into practicing guitar and piano, upping my total practice time on those two instruments from a few minutes a day to 2-3 hours a day. To my compounding frustration, though, I soon developed pain in both wrists, which, of course, is what happens when you abruptly start practicing guitar and piano two to three hours a day. I was pretty bummed out - it really felt like every musical avenue I explored led to a dead end. My wife Sarah and I landed in Toronto on a Friday afternoon, the day before my scheduled surgery. I tried to get some rest, but with the next morning’s procedure on my mind, I didn’t sleep much that night. On Saturday morning, Sarah and I had a light breakfast at Starbucks and caught a cab to the clinic. Our cab driver was an extremely charming, effusive Ethiopian fellow who was clearly as adept at subtle self-promotion as he was at driving a cab. I liked him immediately. In addition to being funny, clever and full of recommendations for things to do and places to see in Toronto, he was also available to furnish transportation to all those things and places for a low, low rate. He’d even take us to and from Niagara Falls for $350, including a three-hour waiting period so we could poke around at our leisure before heading back. To Sarah and me, this was a little like being offered the chance to buy a new Bentley for $80,000: a great deal, perhaps, but far enough out of our price range that the bargain was rendered moot. Nonetheless, this savvy businessman quickly became my favorite cab driver of all time, and talking to him was a much-needed distraction from the procedure I was about to undergo. We arrived at the clinic and had a seat in the lobby, where Dr. McGrail’s assistant met us before leaving to set up the operating room. Dr. McGrail arrived soon after and proceeded to prep for surgery. I had brought a video camera, and I took a few final shots of my not-yet-sliced-open top lip. [caption id=“attachment_194” align=“aligncenter” width=“384”] 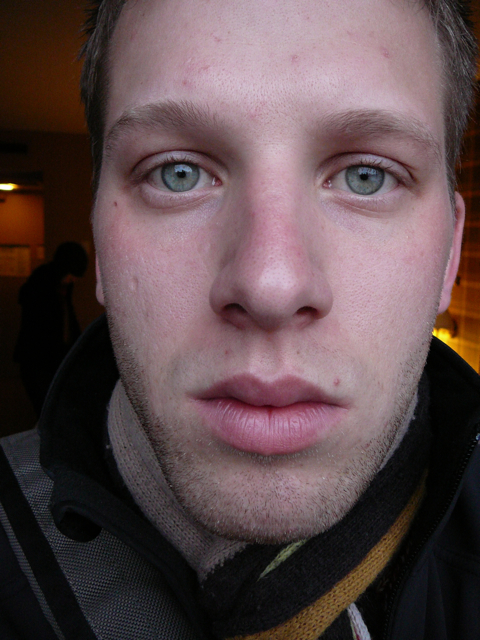 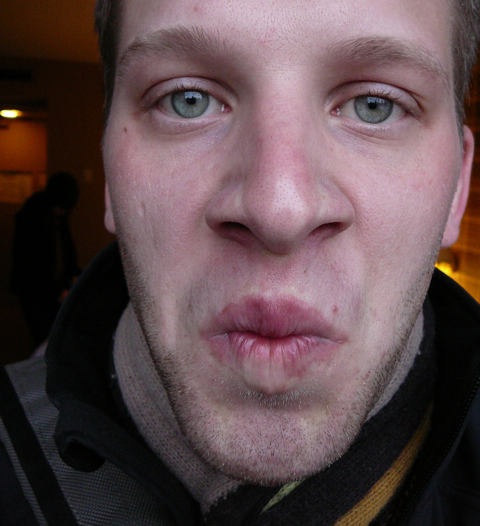 Notice the inability to fully pucker or purse the lips. That’s the muscle tear at work.[/caption] I like to consider myself a fairly unflappable person, but I was as nervous as I’ve been at any time in my life. I had only vague notions of what to expect, and I feared the worst. Dr. McGrail’s assistant retrieved me a few minutes after 9:30, and I set up my tripod in the corner of the small operating room about 8 feet from the action. Sarah was not allowed to watch the procedure, which was a disappointment at the time but in hindsight was probably a good idea. I tried to watch the video for the first time a couple of nights ago while writing this post, but I only made it a few minutes in. It’s not that it’s gruesome, it’s just . . . hard to watch, and I especially wouldn’t want to watch it live. Back to the action: I laid down on the operating table, and after Dr. McGrail examined my lip, found the muscle tear, and marked where the incision would be, the surgery began with a shot of lidocaine administered directly into the middle of my upper lip. Now, I knew I would be awake and under local anesthesia during the procedure, but I hadn’t thought through exactly how everything would go down. You know, like how the anesthetic would get inside my lip. This was the only truly painful part of the surgery, and even it was not as bad as it sounds. “Extremely unpleasant” is perhaps a better description. To my surprise, the only part of my lip that went numb was about an inch-and-a-half in the middle, and I was immediately concerned that Dr. McGrail hadn’t used enough anesthetic. I had no need to worry, though, as he had numbed exactly the portion of my lip on which he would operate. It was quite surreal, mid-surgery, to retain full feeling only a half inch from where the scalpel was currently working. Dr. McGrail was semi-retired, and though his age had made me slightly uneasy in the weeks leading up to the surgery, I quickly realized I had no reason for concern. The first thing I noticed about McGrail-as-surgeon is that he projected an air of complete control, and more importantly, he clearly retained the fine motor control of an experienced surgeon. His bedside manner was likewise superb. He explained every new step during the surgery and kept me somewhat distracted by engaging me in limited conversation between steps, although he seemed aware of my compromised ability to carry on a discussion in my current state, unlike some dentists I’ve known who, while your mouth is full of dental instruments (and their fingers) ask you things like, “What do you think of the United States’ ambivalent stance vis-a-vis the Syria issue?” At best, one can only reply, “Waw, ah thangh . . .” After waiting a few minutes for the lidocaine to take effect and with a very British “Now then,” Dr. McGrail began the incision with short strokes of the scalpel. While I felt no pain, I could feel the pressure of the scalpel and strangest of all, I could hear it cutting into my skin. It sounded like scissors cutting through cardstock. You’re welcome for the mental image. After the incision was made, the next step was to separate the skin above the lip from the underlying muscle where the tear lay. Again, I only felt the pressure and heard the sound of the scalpel; there was no pain. When this was finished, Dr. McGrail asked me to try to make an embouchure, to which he almost immediately said “There it is.” He explained to me that I would hear a soft buzzing sound as he cauterized the edges of the tear before sewing it together. In any other context, I’d describe the sound as more of a “sizzle,” especially when taking into account the accompanying smell of . . . well, cooking meat. The lip lies directly under the nose, let us not forget. At this point, perhaps 15 minutes had passed since the anesthetic was administered, and all that was left was to repair the muscle tear itself and then close up the entire site, and Dr. McGrail worked quickly and efficiently, asking me once more to make an embouchure after stitching up the tear to make sure the stitches would hold. The whole process was over in about 25 minutes, and my overall impression was of a highly skilled surgeon who was in total command of the situation throughout, having performed this procedure so many times that he could have almost done it in his sleep. This was the reason I’d gone with McGrail over younger surgeons of equal renown: at the time I had the surgery, McGrail had performed this particular procedure around 100 times. As far as I can tell, no one else can approach this number. Upon exiting the clinic, we walked to the pharmacy a few doors down to pick up the penicillin and Tylenol 3 (with codeine!) that Dr. McGrail had prescribed. Here’s a picture taken in the pharmacy, just a few minutes post-surgery: 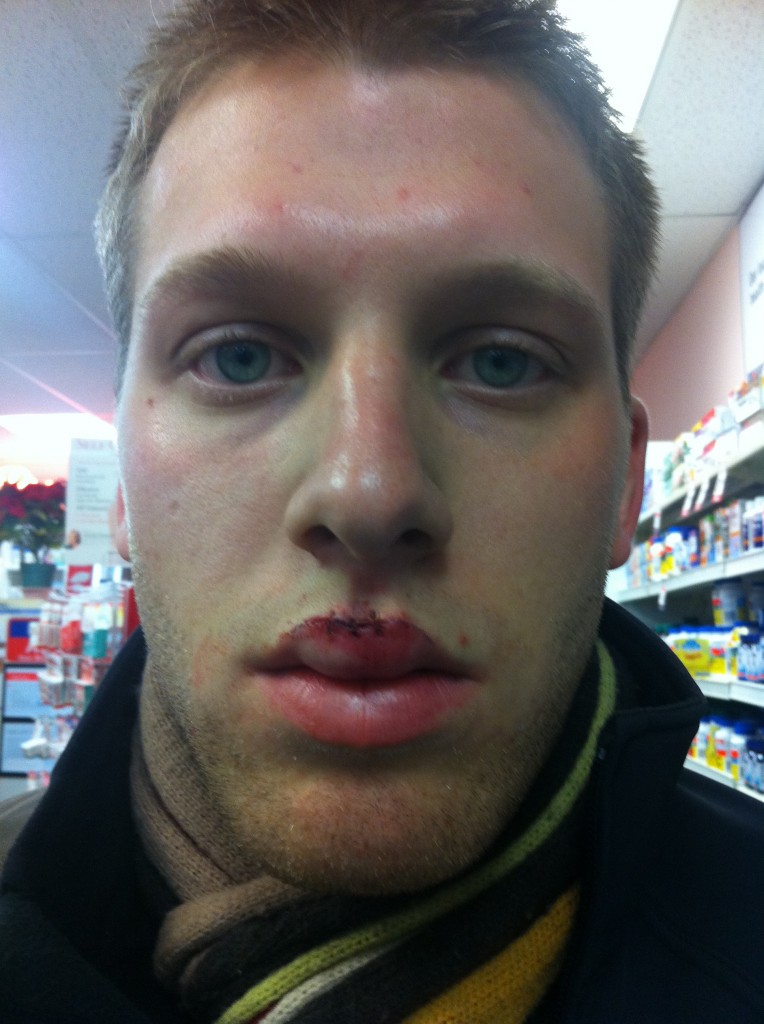 Yeesh! At this point, I began to understand how people with facial disfigurements must feel. While we were waiting for the prescriptions to be filled, I noticed out of the corner of my eye a couple of older women looking at me as they sat by the counter. I glanced in their direction, and they quickly averted their eyes. After picking up my prescriptions, we stopped off at a coffee shop a few doors down to grab a snack for Sarah and give me a chance to pop my pills, as the anesthetic was beginning to subside and my lip was beginning to feel angry and capable of inflicting great misery, like a badger awoken from a nap with a fly swatter. As we entered the coffee shop, I noticed a table full of blue-collar guys staring not-so-subtly at my lip. Again, they looked away quickly when I returned their stare. For the rest of the weekend, this would be the theme. I could feel nearly everyone we encountered – joggers, fellow subway riders, restaurant employees, other hotel patrons – staring at my face before looking away, moving quickly-but-not-quickly-enough. I tried not to let it bother me for a few reasons: I had anticipated this being an issue, and I’ve been guilty of doing the same thing many times. Our vision is just attracted to the unusual, and most people don’t mean anything by it. Still, like a student goofing off in class and thinking his teacher oblivious, I had always thought the person I was looking at didn’t know I was looking at them. As a classroom teacher myself, I’ve since become aware that teachers see pretty much everything, and as a person with several obvious stitches in his swollen lip, I quickly became aware that when everyone is staring at you, you really do notice. [caption id=“attachment_173” align=“aligncenter” width=“384”] 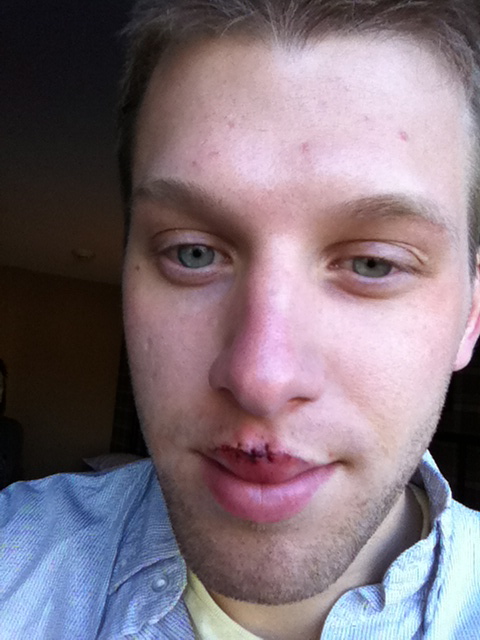 Back at the hotel, a couple hours after the surgery.[/caption] The rest of the weekend passed in a flash. My lip felt progressively better as time went by, though two developments alarmed me. The sutures bled a bit at dinner the first night, and by the morning after the surgery my lip had developed several purple spots and had swollen to an astounding size. Behold! [caption id=“attachment_174” align=“aligncenter” width=“384”] 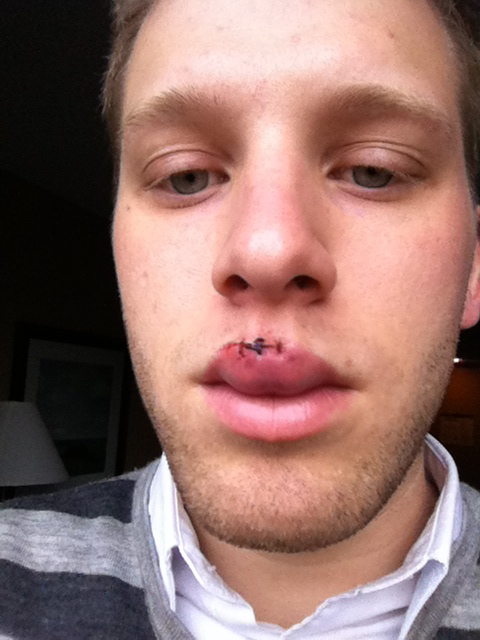 The day after the surgery. Holy swelling, Batman![/caption] I was quite concerned (don’t I look concerned?), but when I saw Dr. McGrail for my checkup on Sunday morning the swelling had gone down quite a bit and he said the purple spots were normal - just bruising to be expected after such a procedure. With the post-surgery checkup done, all that was left was to grab a quick lunch and head for the airport. My only regret is that we didn’t see a little more of Toronto this time. Because I was more than a little preoccupied with taking care of my lip (and because we’d seen many of the sights during a previous, happier visit and didn’t want to spend much money on this trip), we didn’t do much around the city. My reasoning was that I didn’t want to risk an elbow to the mouth in a crowded public place, but in retrospect, a little sight-seeing would have gotten my mind off the surgery. We did some shopping and had some great meals, but spent too much time bumming around the hotel. Next Friday: the long recovery begins!