It was an F# that did me in the first time, believe it or not. Not the high one, just the F# on top of the staff.

On May 7th, 2010, at 11:20 pm in an Albuquerque casino, everything changed for me. At that moment in time, I was finishing up a three set, four-hour gig with one of my regular groups, a local Top-40 band. It was a pretty typical Friday night. A little background: at the time, I was finishing my M.M. in trumpet performance at the University of New Mexico and freelancing with one band or another most weekends, usually splitting the lead book. I was loving it. Being a freelance musician had been a goal of mine for a long time, and although I certainly had a lot I wanted to work on in my playing, I still remember the first time I realized that playing the trumpet and teaching was paying my rent. It is a very cool feeling.

I was very focused on improving on the horn, and my daily time on the trumpet was increasing rapidly. I spent at least an hour and a half on fundamentals each day (even on gig days), and often my maintenance routine ran closer to two hours. Days off were unheard of, and I had a lot to be working on: my long warm up/maintenance routine, solo repertoire for my upcoming recital, music for university ensembles, jazz improv work from occasional lessons with Bobby Shew, and any gig music that needed attention. Not to mention rehearsals and the gigs themselves.

Looking back, it’s painfully obvious that I was courting an injury. At the time, though, I didn’t even know such a thing was possible. I mean, I knew intellectually that muscles can stretch and tear when overused (and I was vaguely aware that Freddie Hubbard had sustained some kind of lip injury toward the end of his career), but I was rarely in any pain when I played, so I saw no cause for alarm.

At the end of that third set on May 7th, 2010, I opened the book to the last tune of the night. I really didn’t like playing this tune, as it was a long blow: not too much above high C, but not much rest, either. It was five minutes of nonstop horn-on-face around the top of the staff, but on the other hand, this tune usually made an appearance at the end of the gig. Old hat.

About halfway through the tune, while playing an F#, I felt a slight pinch as something give way in my top lip. It was over in an instant, and my first thought was “Ohhhh, ****. Something BIG just happened.” Surprisingly, the pain was very mild and it didn’t linger, but I noticed immediately that the physical composition of my lip had changed. It no longer felt uniform and full, but thin, with a lump of flesh in the middle. Needless to say, I was freaked out. I limped through the rest of the tune and asked the other trumpet player, a close friend, if my lip looked unusual. He said no, and I left the bandstand to find a mirror.

I took this picture when I got to the bathroom: 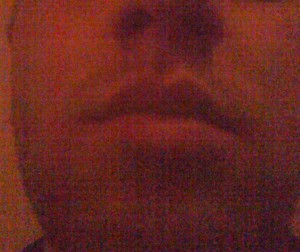 Hmm. I’m not much of a photographer, but I wish I’d had the presence of mind to get a decent picture to document the moment. Anyway, I was surprised when I looked in the mirror, as this is pretty much what my lips always look like when I’m done playing: a little swollen, but otherwise normal. Appearances aside, though, my top lip felt like it belonged to someone else. I drove home from the casino and iced my face for 30 minutes or so before forcing myself to go to bed, hoping everything would magically be back to normal in the morning.

Everything was not magically back to normal in the morning. I started my usual warm up/maintenance routine, and my sound quality and range seemed unaffected. My lip, however, felt completely wrong. It was like I couldn’t contract the muscle to resist the mouthpiece and was instead simply mashing the horn into limp chops. After twenty minutes or so, I called it a day and found a sub for that night’s gig. I couldn’t remember the last time I only played twenty minutes in a day.

I spent Sunday researching my new condition, and I quickly realized that muscle damage, including a rupture of the orbicularis oris, was a real possibility. After a little digging, I found two surgeons who had experience dealing with injured brass players. I called them both; one suggested coming to see him immediately, but the other suggested I take a few weeks off to see if that helped. I didn’t have much choice, really, as my wife and I didn’t have funds to travel across the country on short notice. I decided to take a month off. It was the longest month of my life.